The following is an old article about treeplanting that someone sent me from Canada more than a decade ago. It seems to still ring true today. Eloquently written I thought I would include it on these pages.

Treeplanting is much more than a seasonal job; it is a commitment to the bizarre world of putting trees back where they belong, where they had always been before, so they can eventually be taken out again. You  understand you are not putting in a forest, you are putting in a crop and your body is the harrow, seeder and manure spreader all in one. You try not to think of whether the crop will survive or fail, because it is beyond your control and you will get paid regardless. You will stand out there under that great big sky and you may realize that you love your job in a way you have never loved anything before. With every tree, you have planted part of yourself. 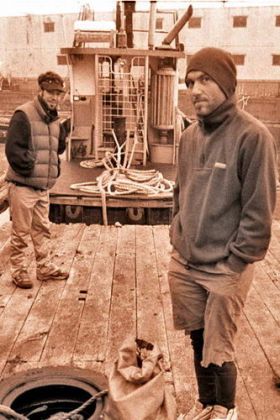 Every camp contains an eclectic collection of people: students making fast money for their fall semester, ex-hippies still happy to be living on societys fringe, economic outcasts, young Easterners out west looking for adventure, new immigrants who have no other options until they command the language or qualify in their field, lifers who put in the time to take out the cash. You can make a lot of money planting trees, if you’re good enough. The best of the best, the camp highballers, can hit $300 a day on a regular basis.

Planters tend to live invisible lives, vanishing into the bush every spring and emerging months later with funny tan lines and bruised shins. It is a life lived slightly outside the norm. Social graces that wear off in camp can be difficult to recover back in town. Some planters don’t even try — they can wreak havoc while in town on their days off.

Personally, I never thought a tough job was an excuse to indulge in poor behaviour, however I don’t completely mourn the erosion of the patina of civilization that happens when you plant trees for a living. Something about the job and the lifestyle breaks you apart as a person and puts you together again. If you survive the process and keep planting, you understand yourself better. You wont lie to yourself about anything. You learn what your body will and wont do, and you respect those limits. You learn what behaviour you will accept from yourself and others. You simply face up to the difficult, because bitching wont change it, and it wont go away. 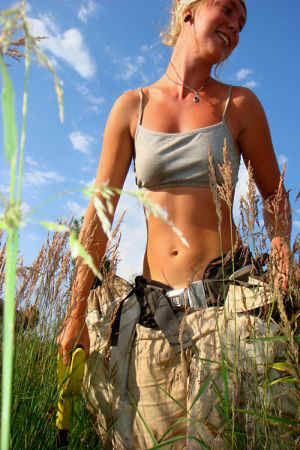 I had to attack the ground like the mosquitos were attacking me. Stride, stride, probe, screef, screef, JAB!

Many relationships start on the treeplanting block. There are thousands and thousand of children who have been conceived in the duff. I have two.

For enduring, you are rewarded. Peaceful bear encounters, great food, skinny dipping in a remote lake on an afternoon off. Apricots. Sweet, clean laundry. A series of mind-blowing, end-of-contract parties. Hackeysack on the helipad. The smell of wet spring earth as your shovel cracks it open. Northern lights. You are a member of a club made up of thousands and, when you meet, you understand each other’s experiences without having to discuss it. Planter’s claw is your secret handshake.

As one treeplanter put it:

“I will never forget the time I took off my boot and threw it into an afternoon so thick with bugs that I could see the tunnel of its trajectory. My feet hurt. My wrists hurt. My skin hurt. Still, I know my grandchildren will see the trees and be glad I did it. I will tell them about the bugs and the bosses and it will sound like the stories of the war my grandfather told me. It was war, another children’s crusade. We did it because we had to, and even though it was hell, it had a kind of peace that was hard to leave behind. Every time.”

In the course of planting the usual 1,600 trees per day, a treeplanter:

·         Travels 16 kilometres on foot while carrying heavy loads of seedlings

Language of the Mountain People — a glossary of treeplanting terms 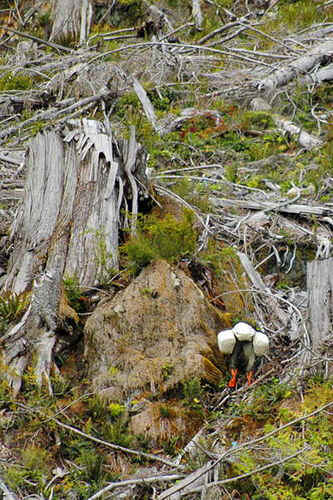 back cut: A forceful jab and twist just behind the tree with the shovel to close the bottom of the hole.

bags: Treecarrying gear with straps like a backpack worn on the hips, made out of plastic-coated canvas.

bag up: Filling the bags with a couple of hundred seedlings at the cache on the side of the road.

bootscreef: The removal of organic material from a microsite by use of one large boot.

bootin’ up: An activity that occurs somewhere between breakfast and the first run of the day and is usually accompanied by a sincere groaning noise.

claw: It is not uncommon to have to pry open the fingers very slowly in the morning in order to use the hand. A tight grip on the shovel, and constant bashing against rocks, can bring on the claw in a couple of days.

cream: Cream show. La crème. Gravy. Those parts of the block where the planting is very fast relative to the bid price.

crummy: Crummies are trucks, driven to work, over bad roads, with names like Suburban, or Pig and Fist. Crummies are like home base in kick-the-can, a refuge in the heat of battle, a place to beat the rain at the end of the earth, a hotbox, a home.

dibble: Once the planting tool of choice, a dibble is a long stick with a round metal end just slightly larger in diameter than the plug.

duff: This decomposing organic material is what a screef is intended to remove in order to expose a plantable spot. Duff ranges in depth from the slightest skiff on top of deep soil to a bottomless layer of rotting wood. 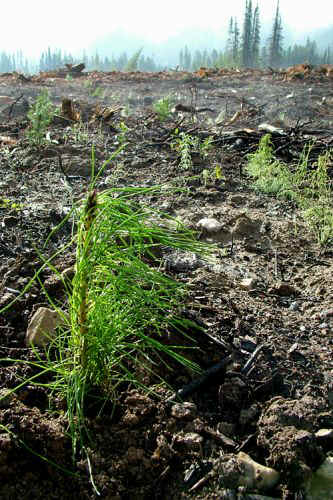 greasy black: The state that organic soil must be in to be considered plantable.

gumbo: A completely bizarre combination of silt, clay, and organics that is stickier than snot. Sometimes referred to as crew glue.

plugs: Most trees planted these days are grown in huge nurseries with their roots in slender containers so as to form a root plug.

reefer: A refrigerated trailer where seedlings are stored.

screef: Removing the organic layer from the soil using a shovel or a boot.

hit pile: A widely applicable description of most of the places planters shoe up for work, though only truly appropriate for those blocks where the slash and rock make movement not only tortuously slow but also very dangerous.

shnarb: The mangled pieces of trees left on the block after the stems have been dragged to the road and loaded on to trucks.

slash: Slash is all of the logs and branches and stumps and assorted shnarb that clutters up the block.

stash: To stash trees is to hide them under the slash or bury them. Stashing happens very rarely, and is widely seen as the lowest expression of planter decency.

tree line: the edge of the block, where clearcut blends back into forest, usually accompanied by a skid trail or a fire guard to further delineate it from the work place. The tree line is one of many goals on which a tree planter sets his or her sights throughout the day.

tree runner: The person on the crew who is in charge of delivering trees from the reefer or the main cache to the individual planters on the block. Tree runners spend a lot of time in trucks, on quads, or driving back and forth from camp to the curling rink in town where the trees are sometimes kept.

But for every green pasture, there is a hell side!

Pictures on this page drawn from replant.ca