When crazy people like treeplanters meet nature in such a raw environment, you can expect some interesting things to happen. Following are a collection that I have managed to remember over the years.

– One guy was planting away in a mountainous area and fell through the top surface into a deep ravine. Fortunately he landed right on top of a short log which had previously fallen into the ravine but created a cross bridge. Below that was an open, dark and neverending ravine where the planter’s howls may have easily escaped any rescuer. Sometimes I truly feel the presence of God out here in nature.

– Once we were in an area where there were a lot of bee’s nests buried in the ground. One girl was getting bit in the face six times a day. I was planting next to a friend of mine and thought to God that we should be spared any bee bites, as I believe that all animals listen to God. A few hours later I heard my friend scream and he later explained to me that he was screefing away the top layer when he revealed a nest of angry bees. His first reaction was to open wide his mouth and exclaim fear as the swarm of bees charged towards his face. He ran away and none of them bit him.

A few days later I was planting in a slightly different area and came upon a microsite surrounded by slash. Above the plantable spot slanted a dead tree and I was trying to bounce it out of the way. I was nudging and pushing wildly at this dead slanted tree until I noticed some spots around me. I slowed down my movement, still pumped and oblivious on adrenalin pumping through my system, and it slowly dawned on me that the little spots were bees, as I heard an increasing number hum around me. As I began to clue in that a hornet’s nest was dangling on the dead log in front of my face and I was surrounded by many angry bees, the spots began to circle around me and form a tornado shaped attack formation around my standing body. Once this clicked in my brain I started running as fast as I could out of there. About five second later as I was sprinting away as fast as I could, I got a nip into each of my calves from two separate hornets, which seemed to serve as a warning to me by the queen to pay more attention. 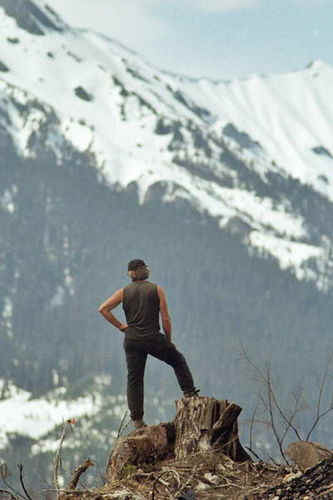