The above mentioned quality control procedures sound quite impressive, dont they? You would expect an industry this old to have developed a solid and systematic approach by now. Unfortunately, from the perspective of a lowly planter like myself, it appears suspiciously otherwise. For your entertainment I will now rant about this issue and reveal some interesting stories.

As I have already mentioned, I planted for 6 seasons/years in a row, took a 17 year break, and then planted a seventh year (more may follow). I therefore have experience over a 20 year period. Even when I was planting 20 years ago the industry seemed to have its head deep up its arse, contrary to the many decades that it had already been operating. Entire mountains would be logged and then replanted with pine – the original tree. But because the entire mountain was stripped of trees, which naturally consume water and their root structure helps keep the sloping soil intact, the water level in the soil was much higher than before. Meaning that all the planted pine drowned. Two years later they came back and planted spruce instead, but by then much of the top soil had already washed away. Once I was on a helicopter show (contract) where the flight up to the top of the mountain and along the rainy coast was fantastic. But one day the cloud cover was thick and the chopper could not pick us up, so we had to walk down the mountain to a truck waiting for us at the bottom. We walked along the logging road hugging the side of the mountain but were amazed when it abruptly ended. Standing on the edge we looked at a large empty cone shape which had replaced the mountain ridge the road was bending around, and saw a massive pile of rubble poured into the valley below. A third of the mountain had just washed away. So, over time the geniuses at the top would clue in that such large scale logging can cause unwanted ripple effects in nature and they would make the appropriate adjustments. Like sometimes I would plant alder in the sandy landslides developing under the logging roads criss crossing various horizontals of steep slopes. 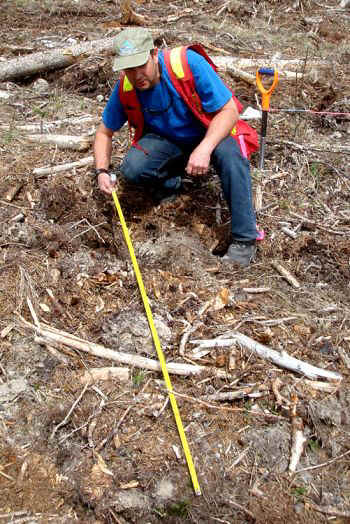 The alders grew and rooted quickly, hopefully stopping the sandy landslide from spreading and getting larger. The logging roads apparently cost a million dollars to build a kilometre up in the mountains. They would often wash away and be unusable by the time they sent us in to treeplant, and hence the need for a helicopter (which back then rented for $500/hour, the driver earning about 50k a year). Other times the choice, large and old growth trees were only to be found at the very tops of the mountains, the rest having been already logged. Since it was uneconomical or impossible to build a road that high, they would just chopper out the last remaining old growth forest and drop them in a lake below. The greed and insatiable thirst of whiteman has no borders. As chief Seattle of Washington responded when Euroman first hit the shores and started devouring nature: “After you have cut the last tree and overturn the last rock, you will realise you cannot eat money.” 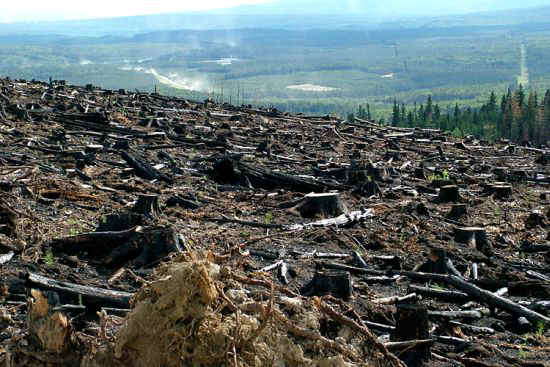 There are many sad and bewildering tales of exploitation by the greedy capitalists, but the government’s management of the industry can be equally amusing. For this I would like to make an analogy to communism, having spent some time suffering under a bureaucratic Czech government. The system of government involvement in this industry may be typical of the inefficient bureaucracy governments seem famous for across the entire planet. Twenty years ago I remember how most foresters frothed at the mount in exclamation of the importance of screefing large areas around the planted seedlings. Apparently the top soil had to be removed for a square foot around the planted tree so that the sun could heat up the soil and make the tree feel nice and toasty warm. Now they prefer no screefing, “mimicking nature”, the conclusion their genius came to.

In the past there were tales where the foresters would walk around with a one foot metal square dangling from a string. They would drop this square around the tree and demand that all top soil within it be removed. For my last year planting I had the benefit of planting on two contracts in the same area. One was for a private company and the other for the dreaded ministry. For the private contract (I usually find that private enterprise is more on the ball than the government) we were told we could plant in almost anything – even red rot (decomposing logs). If there was no other choice, then we could plant the seedlings in loose twigs, as long as they were a bit wet (although half the days it was raining, so this requirement was absurd).

Then we moved to the ministry contract and memories resounded of similar contracts 20 years ago. There seems to be an army of pencil pushers at the top who like to draw on the computer and play with Excel files, creating neat little specifications drawn from their textbook studies. Little do they consider that most treeplanters are intelligent students who also know how to memorise textbooks. After seven years of planting and experiencing a broad range of contract specifications, I feel I have developed a sense for the trees’ requirments. For example, on this ministry contract, they were very strict about the exact depth the trees were planted at. But they seemed to ignore the fact that the distance between the top of the plug and the laterals (the first branches) was an average of 2 millimeters. How do they expect us to plant more than 2000 trees a day with such a small margin of error? Let us analyse this more deeply. The plug is made up of roots surrounded by juicy soil, filled with special growing nutrients. A “shallow” plug is a great concern in the industry, as they believe that the top of a plug exposed to the raw elements will lose all its moisture. But sometimes the medium in which we plant is quite similar to the soil wrapped around the roots. Could not the surrounding soil also be sucked dry of its moisture? Then we have the natural layer of moss, roots and vegetation which would be left on top of the soil (remember, the new strategy is now to mimic nature, and hence leave the “duff” layer intact). Could not this thick and moist layer of moss help protect and cover the top layer or this sinfully exposed plug? 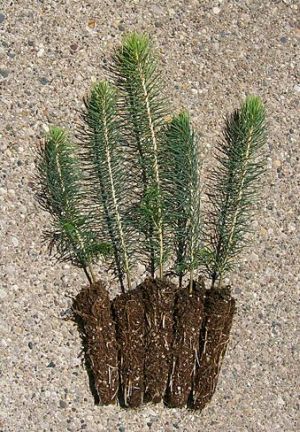 Meanwhile, they also scream that the laterals (bottom, baby branches) should not be covered or hindered in any way, as the duff layer will apparently slow down and stunt the tree’s growth, which is trying to burst out of initial covering. Instead of giving us some leeway, they were very strict and we were forced to go back and “doctor” up the trees. Check that they are planted at the exact depth.

To do this we had to scrape away the duff layer to see exactly how deep the tree was planted. If even the smallest area of the top of the plug was not covered by “designated medium”, we either had to shove it in deeper and cover it up, or push over a bit of acceptable dirt to cover it up. Of course, for political reason so that the forester could see we actually did go through the area doctoring, you would leave the surrounding area uncovered. Hence nature was no longer mimicked and the entire initial specifications were overruled, for the purpose of aesthetics and politics.

On a later contract the forester was convinced that the plug had to be so straight, that even the slightest bend at the very end of the plug would result in a malignantly deformed tree. In both cases, the situation was mostly resolved by the foreman respectfully asking the forester how they propose we produce such an immaculate tree. In both cases the foresters were not able to duplicate their requirements. The first one even slid the tree into the ground on the wrong side of the blade, and spent minutes struggling with each tree. All six of his trees were shallow. In short, it is a bunch of pencil pushers and textbook dweebs at the top who like to look at pictures and produce neat little tables of specifications on their home computers.