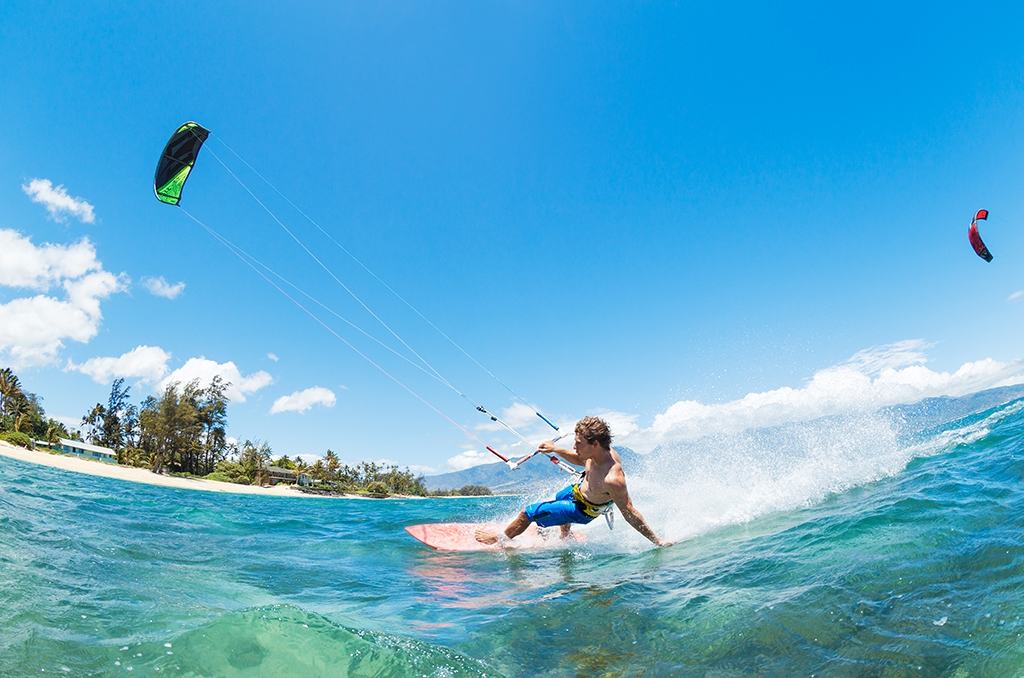 This place was another beautiful chapter in my life. I was traveling through Asia and in Malaysia I first developed a craving to develop a resort on a paradise beach somewhere.

I surfed the islands, then on to Indonesia, and eventually to the Philippines, where I stumbled on this beautiful island. Where there is a will, the way will be provided for you.

At first it was somewhat uncomfortable, living in a tent, sleeping outside on the beach sweating at night during the dry season, but eventually I built myself my own, two story bamboo hut, with solar panel, small wind turbine and a battery which could power my 12V fan and laptop while I slept on my comfortable, queen sized mattress next to the upper level balcony.

I utilized the services of couchsurfing, workaway, airbnb and booking.com to bring in hundreds of guests and volunteers over the span of a few years, while developing the property which I inadvertently discovered later that wasn’t the right one, hence making me a squatter. But the owner was cool and appreciated my developments.

Crystal clear waters, great company around the fire and crapping in the ocean. It was a wonderful experience. But, as usual, sometimes it’s just time to move on to the next experience.

I no longer manage this place, but I inspired some locals enough to continue on after me. It’s a wonderful area indeed, and you can contact either by email Arnold Cabiguen at <[email protected]>, or facebook, or by phone at +639989834011. Mostly only the big hut is available, but it may be possible to rent some of my tents or bring your own. There is tons of space.

Located on a beautiful island near to Linapacan, the half way stop between El Nido and Coron and where you will find the clearest waters in the world.

Stay in a tent right by the shore or pocket of private space carved into the jungle, or our big hut with own solar power. Check out our Pros and Cons to see if this is the right place for you, or the top of our accommodation page to choose the perfect spot for you. Number of boards is limited so * per day rates assume sharing with others, 1000p per person. No instructors at the moment.

If you bring your own board (hard to get around here), we’d be happy to buy it off you and you can surf for free during your entire stay.

Here’s a drone video of this place:

Or a video of some kitesurfing:

Or if you prefer snorkeling (more videos):


Excellent snorkeling just off shore and on neighbouring islands you can swim or kayak to (occasional big turtle too!). And caves to explore, 2 shipwrecks for diving, and a thousand, undeveloped beach paradise islands to discover.


Blend in with a rural community away from the tourist hustle, fishing excursions for only 300p, a quiet retreat and far earshot from even the usual rooster calls often found in such remote locations.

Discover the magic of Palawan and experience rural life among warm-hearted Filipinos. Evening entertainment includes live music around the campfire by ocean side. 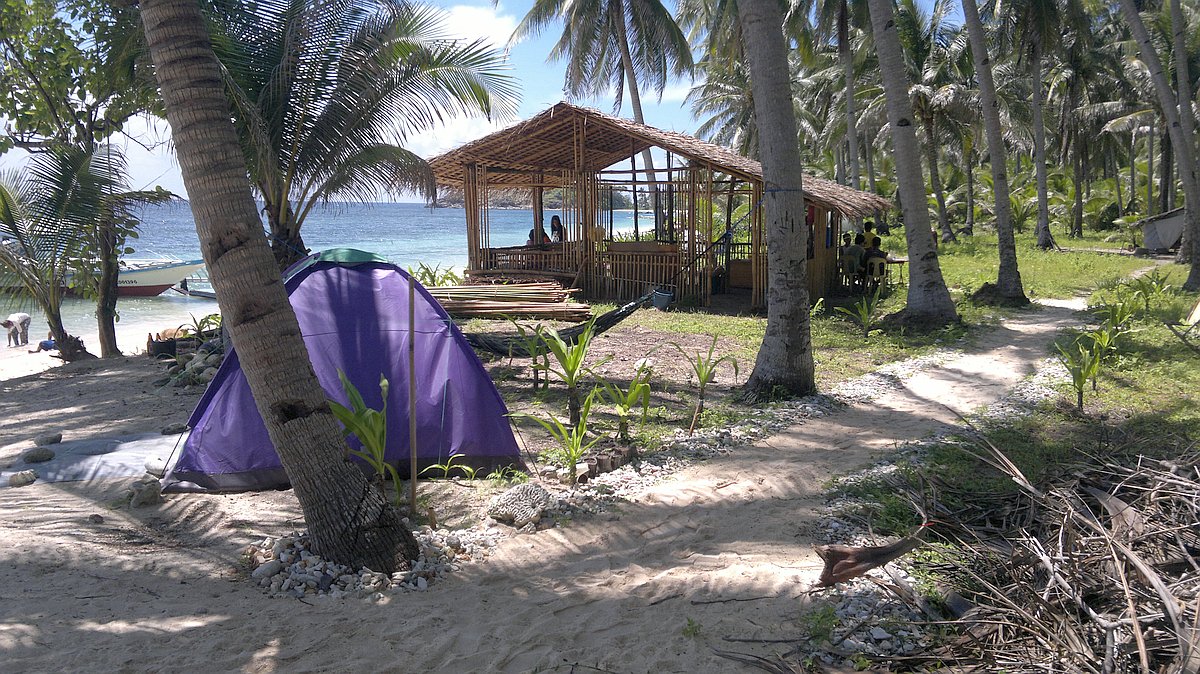 The main hut on the old project, but the winds were so fierce and relentless we had to move… 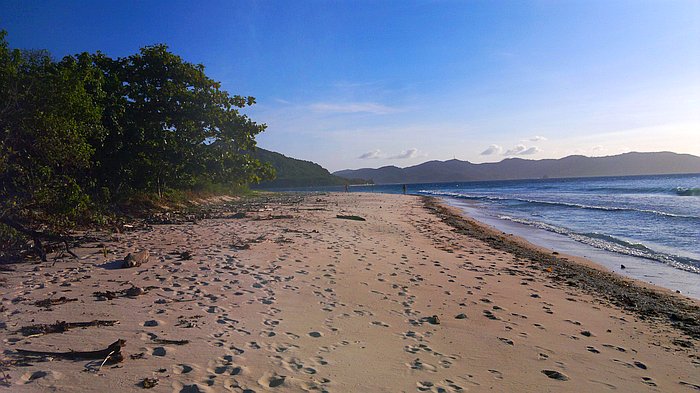 Our beach on the west side of the new island, sheltered from the winds of the open ocean facing side. Good for beginners to intermediates. Advance kitesurfers can either trek for 10min to the other side, or launch from the end of this beach at the southern end of the island and work their way against the wind. 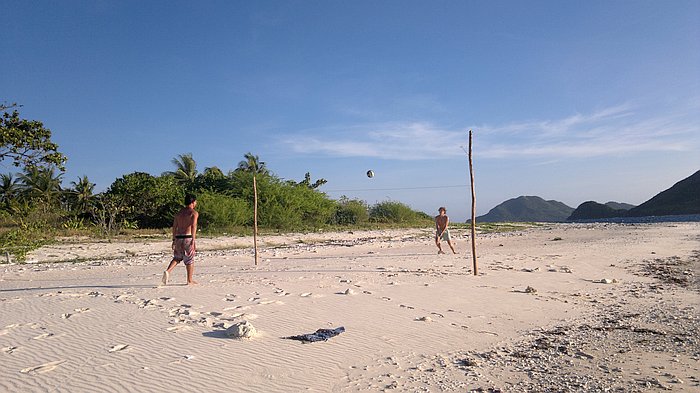 Inevitably, one of the first things we had to set up. 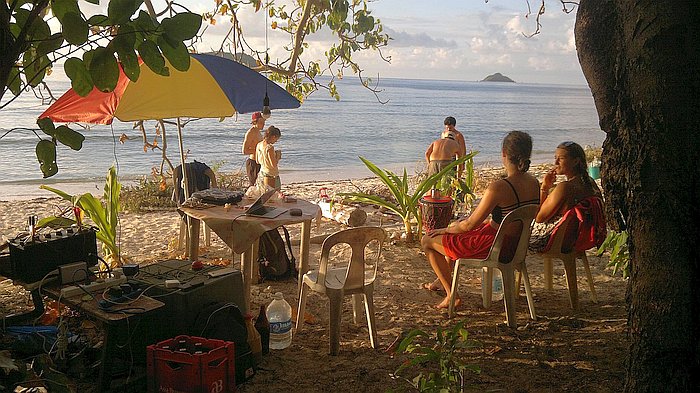 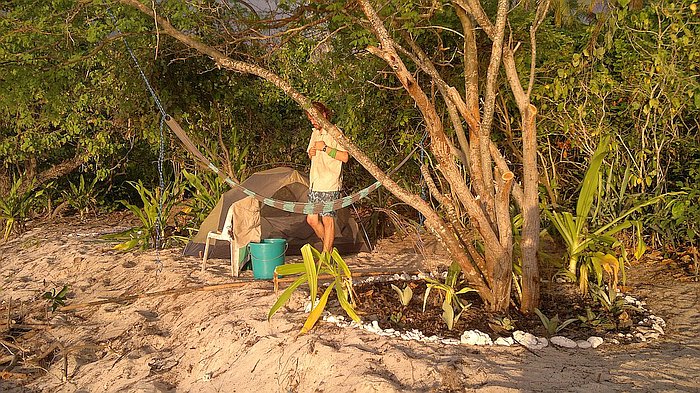 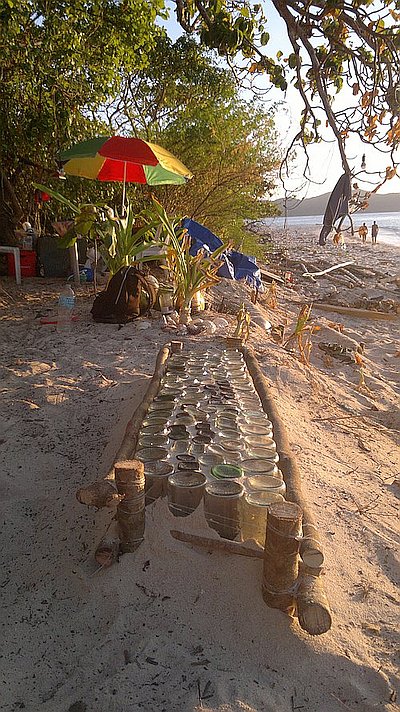 Made seaside table from bottles we collected off the beach. Natural and eco is the name of the game!

More pictures from the previous project, still available for the hearty die-hards: 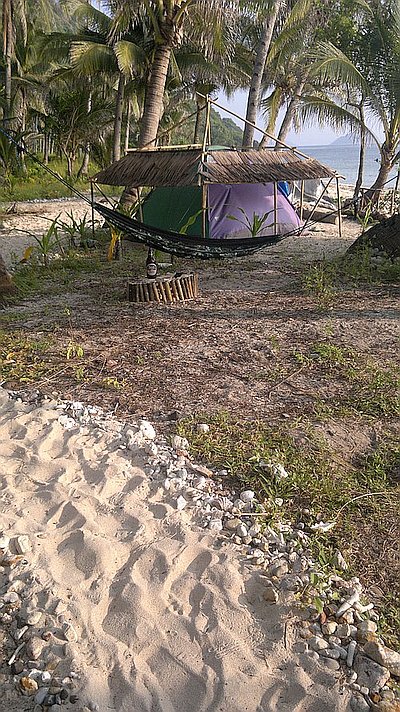 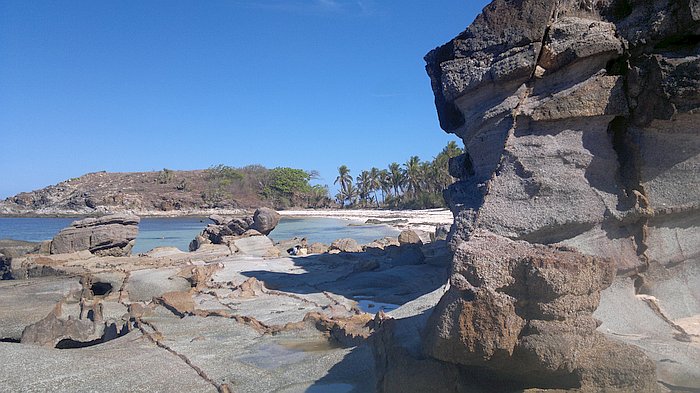 Lots to explore on the island.

Go to the top left (latest) album in our photos section to see our most recent developments.

The following are weather conditions for the big island of Linapacan, about 40min by boat from us and which generally gets more rain because it has higher elevation:

These are the two best areas for kitesurfing in the Philippines: 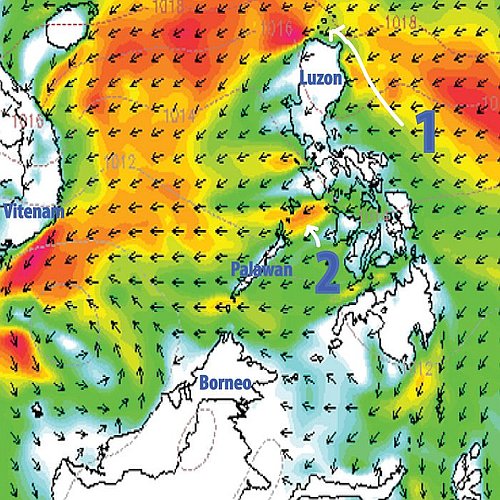 We are in the center of Area 2 (Area 1 is in the far north, but subject to typhoons). You can compare our spot with others in the Palawan area on the kitesurfing and kiteboarding in Palawan page, or check out the Palawan weather forecast page for the weather patterns over a period of a year in a nearby area . The nearest weather station to us is Qi Palawan, east of El Nido (southern tip of the light orange section in Area 2):

Our location on Windguru:

Our island is in the open ocean:

We are located in the lower left corner of Dimancal island, about half way along the long stretch of beach on the lower west side.

From May until October the Habagat trade winds blow from the southwest. They are rather sporadic and unpredictable, but can produce strong winds.
From November until April the Amihan trade winds blow from the northeast but are much more consistent and stronger. They flow around the island to produce onshore winds on the west side but which are generally subdued and ideal for beginners and intermediates. This is generally the best time of year to come, as it is the tourist high season, it almost never rains and there are no bugs. Many of our guests sleep on the beach under the clear stars. 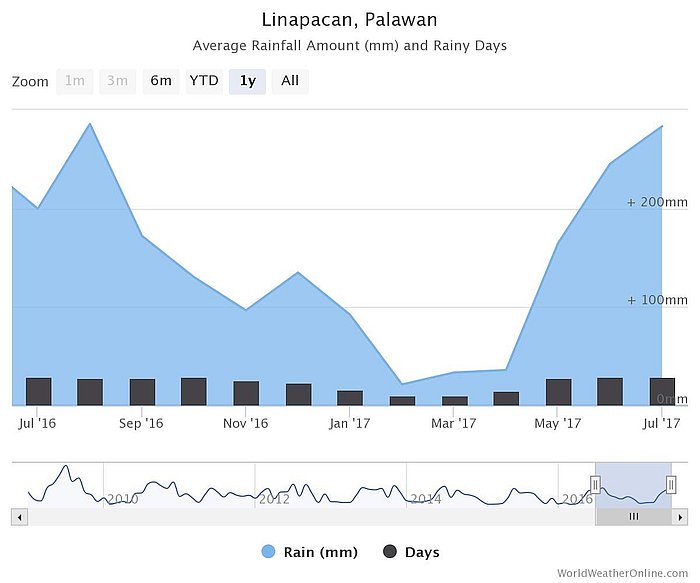 The above graph is for Linapacan, the big island about 30 minutes by boat south of us. It has much higher mountains and often catches the clouds and rain while it remains sunny on our little island. 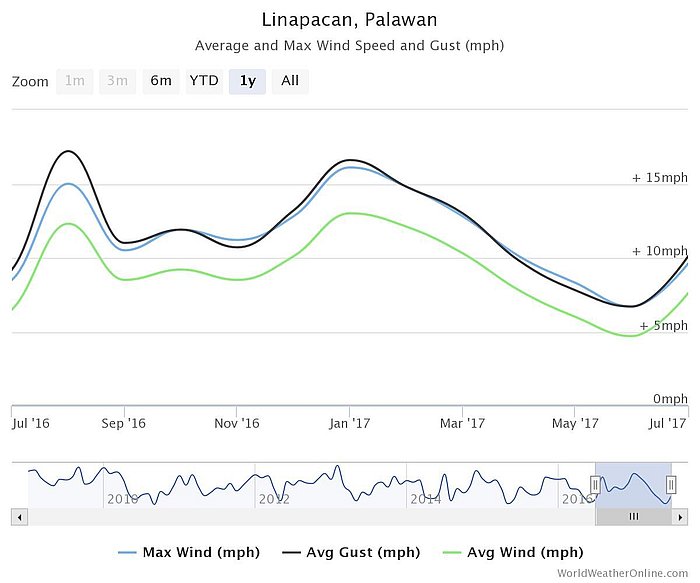 During Amihan, one can launch from the southern tip of the island, a five minute stroll from our resort, and work against the wind to surf on the windier, east side of the island. The small island to the east of us has a cool beach where you can rest in the shelter.

Patoyo Island is just south of Dimancal (where we are located now) and where we first set up before having to move because the wind was so strong and the waves too large for a boat to land on the east side of the island, where we were located. Guests are welcome to stay on that island as well (next two pictures). 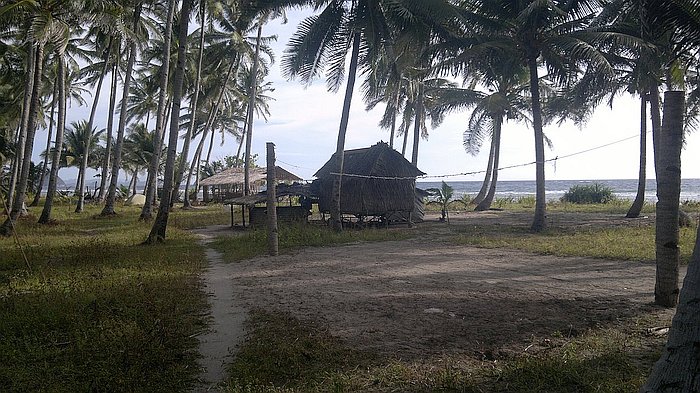 The wind ripped our poor little badminton net to pieces,
here shown before the last string disappeared.
Below, at least our hammock managed to get in some kitesurfing.
Tried to shelter my tent but that eventually ripped apart too. 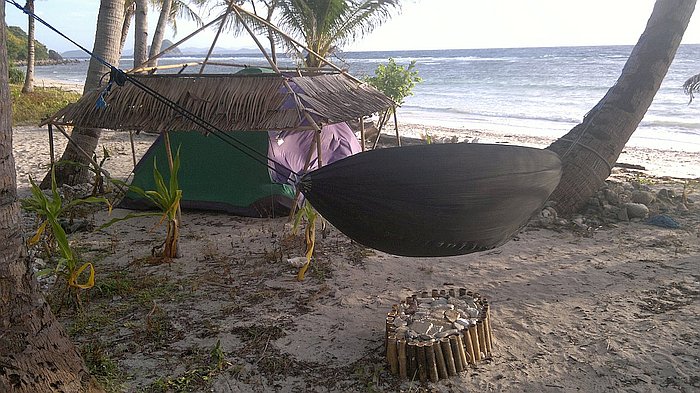 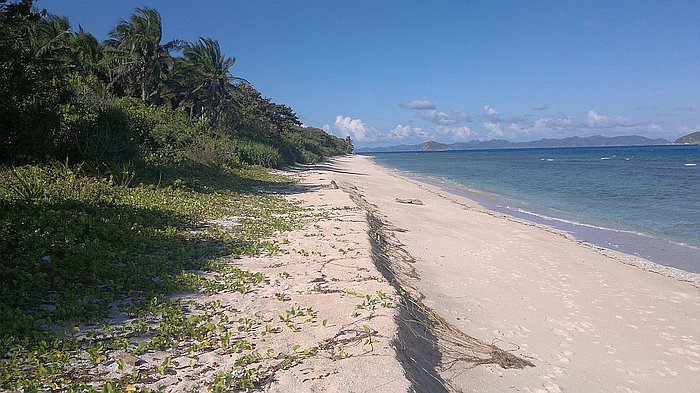 Long stretch of lonely beach on the east side of Dimancal island, facing the open ocean.
Only a few scattered fishermen family huts here.

Snorkeling off an island next to us:


Video some visiting friends made (the town you see is San Miguel, on Linapacan island):

Best way to get here is by private custom Palawan boat tour either from El Nido or Coron, along which you can also kitesurf! Tons of paradise beach islands between the two, mostly undeveloped, off the beaten path. 52 islands in the Linapacan area alone, where we are based.