I make it to the new lot, the volunteers absolutely love it, and soon enough several more volunteers arrive from different parts of the world to bring our working crew up to a record number of 10. Some leave, more arrive, local boat tours are taken, and in two weeks this revolving door of faithful labourers accomplishes quite a lot. 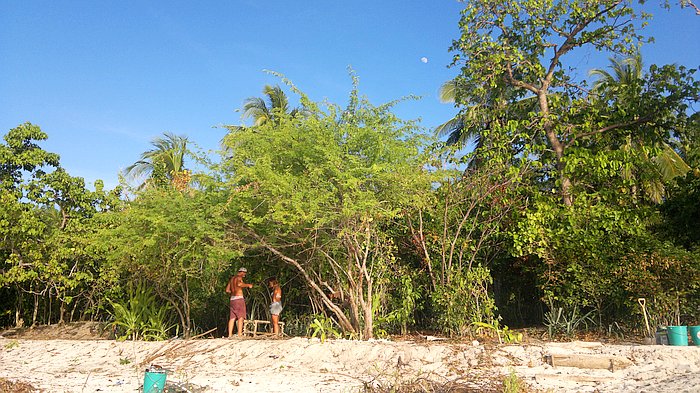 Before arriving, on my initial test run, I asked the locals where Ben’s property begins and ends. They specifically earmarked two big trees on the shore. Big trees are nice, and I quickly developed grandiose ideas of putting the solar system up in one of them, with hammock hanging in the branches, electronics in waterproof tree fort, the angle of the solar panel adjustable by strings. I can finally rejuvenate my childhood dream of building structures in big trees.

We carve out little pockets from the jungle, mostly deweeding and removing some of the more aggressive fauna, and the new project takes a nice shape – contrary to the previous one, which was stripped clean by the tending caretaker of anything other than coconut trees. Not to mention that it is nice not to have to struggle with a caretaker, who suffered a stroke and gets into his immovable routine of burning any fauna, leaving ugly black marks in the soil. 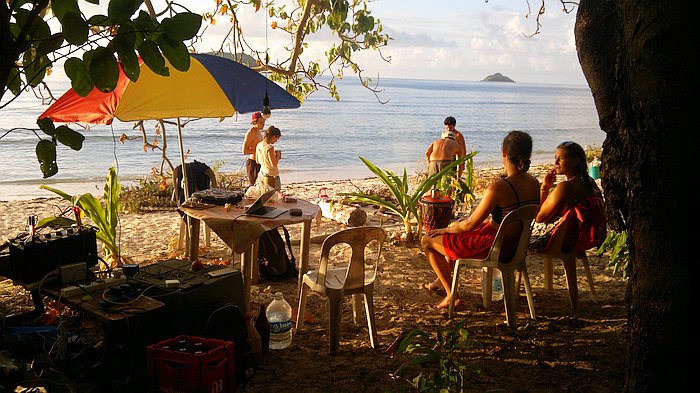 Formation of my new workstation and central lounge area.
Remind you of a famous French painting?

As usual, the interaction between the sun, moon and ocean occasionally brings up heaps of dead corals onto the beach. As I carve out private little pockets of space in the jungle with their connecting paths, I resume my decoration hobby of lining the pathways with contrasting coloured shells. In this process I am also removing the sharp corals from the flat section offshore – about a 100m stretch before it hits the reef and the plateau descends into the deep, where colourful, living corals abound and the occasional large turtle frolics. 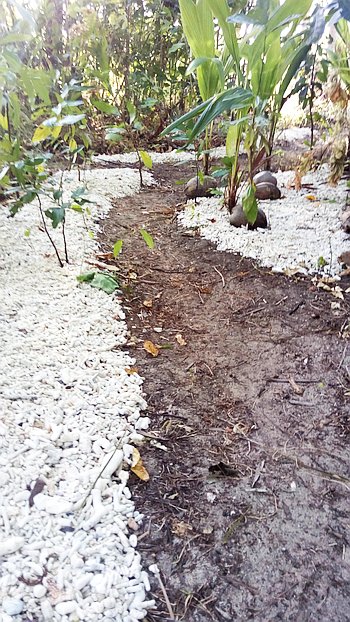 This will make it easier to walk out in shallow tide and carry in supplies from arriving boatloads. Overall, I am satisfied with our progress, some of the volunteers even setting up a rudimentary volleyball court in the abundant beach sand. We have even established good relations with the locals, pulling out the guitar, viola and jambe to jam with them the second night we are there. Beers and bottles of hard alcohol shared, the atmosphere seems rife with enthusiasm.

During this busy two week period one of the volunteers is Filipino, so I grab the opportunity to address the locals and translate all my thoughts on different ways they can make some extra income from my revolving guests, whether they be volunteers or paying. They set up a local store to provide my suggested basics of beer, cigarettes, lighters and chocolate fudgee bars (an acknowledged and immediate addiction of all volunteers so far). During our initial jam session meeting, the captain of the little community followed me to our development after the party was over to discuss some business while polishing off the last of the booze. At one point I asked him who owns the property on the other side of me, to which he responded with that ethereal way of theirs (similar to the Bulgarians with their shaking heads) by raising his eyebrows and puckering his lips slightly with open mouth. This I have presumed to mean yes, or that the three leading brothers of this little community own the entire glorious lot behind me. However, as their original declaration of where Ben’s property is located, this too turns out to be a complete lie. But develop I continue and can now consider myself a squatting nomad, with 24 tents and self-sustaining system ready to uproot and resettle at the slightest whim.

Endless beach all to ourselves!

But before I learn it is not true I explore the lengthy beach and discover wonderful pockets which can be developed, imagining family sized huts with mini huts for the children, or for small groups of friends. The possibilities have magnified manifold. I even learn that the section of beach on the southern tip of the island (an ideal launching point for kitesurfers who want to weave their way against the wind to the wavier and windier side of the island) was once inhabited by a Japanese family who hired the locals to farm the waters for oysters. They raped the local area of pearls and, once rich, packed up their belongings and left. That stretch of beach, therefore, is already mostly cleared and prepared for development, the occasional pile of oyster shells not a great nuisance.

All in all then, everything seems to be on the up and up and extremely positive. I’ve developed a nice relationship with the locals, and feel safer by the fact that there is no community of people on the other side of me, and hence no reason for locals to be passing by my development, eyeing with envy “all the things that I have”. After about a week of settling into the new place, all sorts of objects, such as my battery operated power drill or binoculars, have manifested themselves as missing. Seems the islanders of my previous project smelt a sinking ship and helped themselves to some more goodies during my hectic move. 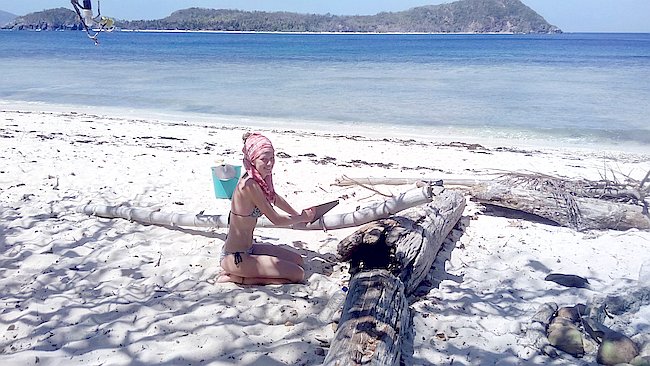 German volunteer making a swing to sit on.

But such petty thefts should no longer be a problem, the locals have begun building tables to accommodate my guests with lunches and dinners, they provide us with an ample supply of seafood at every request, and everything seems peachy happy dreamy, until Ben shows up one day for inspection and says, “Dude, you’re not even building on my property.” Seems the locals didn’t want me developing right next to their little jungle huts, and neither would I want to, due to lack of space or the fact that such a location is hardly ideal to build my dream resort. Especially after hearing the screaming pigs, crowing roosters and crying babies in the distance. Ben tells me that it should be okay as long as I don’t build anything permanent and stick to tents only. I therefore change my tack and decide to become entirely nomadic. Able to pack up everything at the slightest notice, ordering in tarps from ebay and constructing makeshift structures with the local bamboo I have already discovered.

Once again, I am left dangling in one of my typical, precarious situations, waiting for an owner to pop up one day demanding an explanation. I shall continue developing as I have, minus any dreams of building permanent structures, and hope that my humble work of beautification and deweeding of the jungle, with an offer of the usual 50/50 profit share, will serve as a suitable selling point when I do meet the owner. No one knows who the owners are and I have tried so far in vain to get an arriving volunteer to visit the Town Hall’s cadastre office in Puerto Princesa, but let the adventure continue! 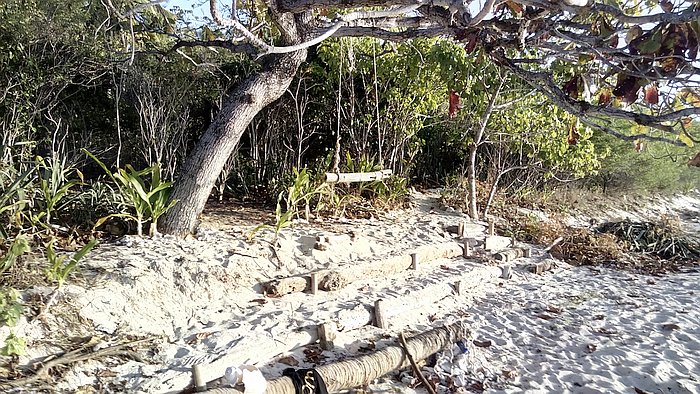 Beginnings of the second camp, further down the beach.

Philippines > Palawan > Patoyo > Owner Who What? 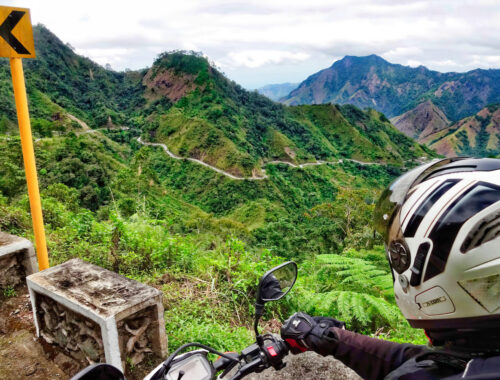 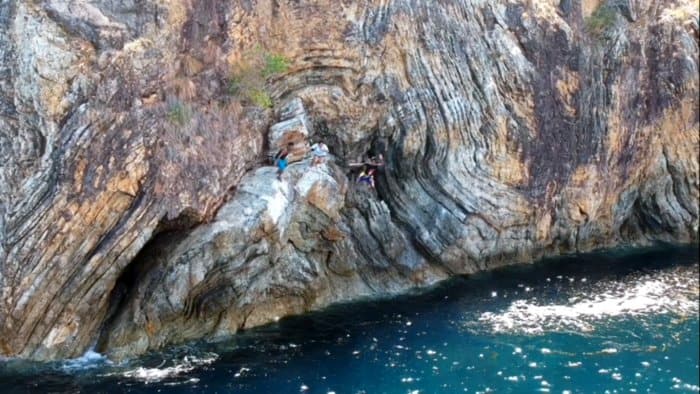