I hope I won’t have to pay more than 80 Euros, or that I won’t be stuck in this expensive city for too long. I even imagined myself as Tom Hanks in that true story movie of a guy stuck at an airport for a couple of years. After all, technically, I could pull it off, having everything with me that I needed. I worry that this logistical nightmare will set the tone for my new life of living solely out of a backpack, now that I have left my truck, my trusty home for five years, behind.

But one thing I like about large and busy airports like this, such as Heathrow, is the international feel of it. People from many corners of the planet, with their particular form of dress and mannerism, mixed up together like a big goulash of culture. I saw a group of Tunisian football players, boasting their colours and sprawled out on benches, some of them sleeping while others played with their mobiles, bored to death and visibly there for some time. They took turns hogging the electrical socket so I had to move on elsewhere.

I saw families and little clusters from different nations. As a foreigner living in any city, everyone tends to adapt towards some common norm, but flying from one city to another you usually dress and walk according to the city you departed from. Perhaps all bundled up from the Swiss alps to take it all off once stepping off the plane in Tahiti. 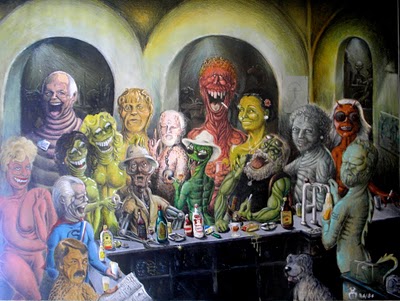 And the bold difference between all the customs and attire visible in this hub of traffic either feels like a costume party or, in some sentimental way, I saw it as a beautiful celebration of humanity. Where people could express their individualism unhindered, making the entire scene speckled with vivid variety, but with calm acceptance of everyone’s differences. Reminded me like the early Star Wars bar scene.

The next morning I check the counter early but it does not open at 9 or 10am, as I was told. It turns out this booth opens at 1pm. Luckily the attendant turns up more than an hour early, as I spy his arrival from my metal bench bed, using my handy binoculars. I rebook the flight, surprisingly only for an additional 190 Euro, and will depart in a couple of hours.

Had the price for an immediate rebooking been significant, I would have been prepared to stay in Turkey for a month, or go back to Bulgaria, then rebook for a much later date.

I decide to follow my usual traveling principle of never backtracking.

“Kupredu” as they say in Czech: “onward forward march”. Stalling on a paradise beach is okay, but backtracking is uncool. And bad for travel karma.

During my lengthy Asia travel preparations I was shocked to learn that I will be required to carry a certain amount of cash and a return ticket to my country of origin. I had made some phone calls, first to the Emirates, which is the home of the airline I booked through, and then to the Thai consulate in Sophia, Bulgaria. The Emirates woman said it was not a problem and, on my visit to the Sophia consulate, the woman there said there is no problem either. In Sophia I had been very close to purchasing a one year visa to Thailand for 125 Euro. Which I later learned isn’t usually offered under such lenient conditions, but everything seems possible in Bulgaria, especially for that many Euro. Many friends who have been to Thailand in the past also said they never had a problem getting in.

Now, on this morning after missing my flight and the hours of madly dashing around the airport the night before, when I go to collect my new boarding pass, the counter lady at Turkish Airlines brings up these concerns. Indeed, some websites had warned that an airline might refuse your boarding if these matters are not in order. Perhaps they want to avoid the responsibility of providing a free seat back?

I explain how I had already confirmed this is a non-issue with the Thai consulate in Sophia and the small airline’s head office in the Emirates. The clock is ticking towards another potential missed flight and the attendants are not budging. Eventually the manager offers me use of his phone to call the Emirates.

Unfortunately, I need my computer to access the history of numbers I called through Skype in order find the correct number to call in the Emirates.

I could run to the other end of the airport like a crazy wildman, where I had found free Wifi the day before, turn on my computer and run back again with the number. But I felt there wasn’t enough time so decided to pay for internet at the neighbouring store to print out a fake return ticket. I feel time is running too short for this, especially considering my call to the Emirates might result in the woman telling me a different story from the previous time.

The manager suggests I book a return ticket online through the nearby internet/copy shop and use that confirmation number, even if I were not to pay for it. Apparently a train ticket reservation would have worked as well. I don’t understand how I can get a reservation if I don’t pay for it, but try I do anyway. As expected, the website asks for my credit card information before I can print out any reservation.

I run back to the manager, whose calm reassurances and slow movement in general have already unsettled me.

Eventually he shows up with a piece of paper: an online reservation ticket flying me to Frankfurt, and then to Prague, on the 10th of October. Finally these details are settled and I am on my way. For next time, it occurred to me that I could take my online flight reservation, which usually comes in a simple text email, change a few dates, switch the arrival and departure points, and print that out on a piece of paper. These bureaucratic hurdles can really be pointless sometimes and I always appreciate how the insane bureaucracy of running a business in Prague has taught me how to be very creative with any obstacle I come across.

I fly into my stopover, Abu Dhabi in the United Arab Emirates, where I have only a 1.5 hour layover. Am looking forward to taking advantage of full washroom facilities. I find the WC with the typical picture of a male but am abruptly halted before entering.

When I tell the gentleman that I am looking for the toilet he sternly instructs me that is elsewhere. On my way back to the gate I take a closer look at the entrance and, underneath the man image I see: “Male prayer room”.

My short stay here is nice because there are free internet machines, and plentiful toilet facilities, while the different shawls, sheets and clothing from the various Muslim nations offered me a nice perspective of the variety just within that culture.

I’m getting used to these exotic airports now! This one definitely seemed more exotic and had a very gulf feel to it, but Istanbul was not as varied as Heathrow airport in London, where the mix was more interesting.

The Move to Asia Starts off With Typical Disaster