Before landing at the Istanbul airport I had spent two action-packed years in the Mediterranean.

While on the island of Cyprus, basking in the glory of the Mediterranean, I regularly alternate between the Christian Greek south side and the Muslim Turkish north side. I have developed a deep feeling of affinity for the Muslim people. Particularly for the young Persians from Iran who populate the Eastern Mediterranean University. Throughout my travels I have also formed bonds with many Roma people, whom I refer to as Gypsies. It is a label they say they cherish. This last point I checked with them very carefully.

I had never intended to go to Cyprus. My travel plan was to stick to the coastline of Europe, leisurely travelling through the coastal countries following the sun and parking my truck at beaches where permitted.

When I first entered the Turkish mainland the customs officials told me my truck could stay there six months and stamped in my passport for that. I assumed this stamp applied to me as well. But later I learned that I could only be there three months. So I was supposed to leave, with the truck, which made the six month stamp completely pointless.

At the three month limit my SIM card stopped working. This was yet more bureaucratic nonsense which dictated I either move to Turkey and pay some ridiculous customs duty just on the phone, or leave the country and come back with the proper paperwork for a new three month SIM. The closest country to accomplish this was Cyprus.

I ended up leaving one day past the three month limit because there was a fierce storm the day before and the ferry couldn’t leave, so I ended up paying an exorbitant fine. Hence my introduction to the island. 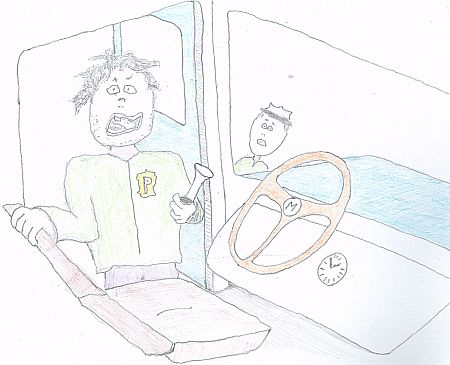 Once off the ferry my truck was at the very end of a very long line of 16 wheelers, obviously delivering goods to the island, which looked like it could take days to process. I walked to the very front and asked if my caravan could be given the fast track. The guard said, “Sure, drive it up here.” I drove up, found him again and pointed to The Big Blue Beast.

“You call THAT a caravan?!?” he screamed.

As he walked over to take a look he waved his arm to invite his guard buddies along. He obviously expected this to be entertaining. He stood on step, his head peering inside. His mouth gaped open as he stared in disbelief, head winding from side to side. He could see my bed against the back doors, the bench, the shelves and wardrobe, my disco lights and other homey touches.

Alas his eyes fell on my old-style bicycle honker, the type with the rubber bugle you press that emits a funny honking sound. His buddies had caught up to him by now. He grabbed my rubber honker and started chasing the youngest guard around the parking lot, honking it at his bum.