Everything is running smoothly in booking my flight from Europe to Thailand. Breezily I confirm the purchase, as I am generally careful when issuing commands on the computer, but a sign of my future travelling difficulties materializes the moment the emailed flight details arrive. October 2.

Okay, I’ll have to knock out the last few roadtrips around Bulgaria and speed up my departure preparations. Everything should be okay. I have already made extensive plans and researched my destinations well in advance. I completed my computer backups, storing data on a server accessible over the internet, in case something happens to my trusty work laptop. I signed a power of attorney to two friends to sell my truck, once and if I find a buyer, and to handle any necessary banking transactions for me.

Bus tickets from Sophia, Bulgaria, to Istanbul, Turkey, in hand, my final going away party in nature, with several friends playing live music and tunes blaring from the truck, lasts well into the night.

The two-legged bus trip goes off without a hitch. The bus arrives in Istanbul early in the morning, giving me all day to dilly dally before catching the flight to Bangkok this evening. I walk through markets offering exotic food and spices, have a few beers, and arrive to the airport WELL ahead of time. Take a nice little nap then start making my way to the gate a healthy two hours ahead of time, as I notice they are issuing boarding passes. The flight is delayed by 30 minutes, so I stroll around the airport, making it to the gate one hour early.

I want to do some reading on the computer while I wait to board my flight, but don’t want to wear down the batteries as I’m not sure when I will next be able to recharge once in Asia. The only electrical socket I can find requires that I sit on the opposite side of the hall with my back turned to my own gate. While reading I keep my ears perked for any mention of my flight or gate number, which I remember intently: 1405 and 303 respectively.

My arrival to Turkey and wander around Istanbul had gone so smoothly. How is it possible that I could screw things up so badly at this very last yard? Is it really such a bother to turn around once in a while, to see if passengers are boarding my gate?

Given the 30 minute delay, I am absorbed in my reading, and not paying much attention. Many people around me also remain seated, so I guess my vigilance wavers.

At 8:47 I notice the time and think it odd that I have not heard my special numbers. I turn around and am aghast to discover that the other side of the hall is practically vacant, no one is standing at the gate and the doors are shut tight.

I put my laptop aside, run to the other side of the hall, see that the TV monitor hanging over the gate is black, and try the glass exit doors but they are locked shut.

I can see a bus sitting idle on the other side of the door.

I run down the hall a notch to look at the flight announcements, see mine second from the top, wait until the display switches from Turkish to English, and read “GATE CLOSED”.

In a panic I throw all my stuff into my bags, run across the hall and desperately try to pull the glass doors open with my fingers.

In despair I watch the bus slowly pull away.

Now I am utterly frantic. Perhaps if I sprint I might squeeze onto the plane before its doors shut.

I hobble-run in my aging sandals but soon take those off and barrel into a full sprint barefoot through the Istanbul airport, carrying the sandals in one hand and my violin in the other.

In the next three hours an unbelievably varied set of instructions are issued from each attendant I ask. 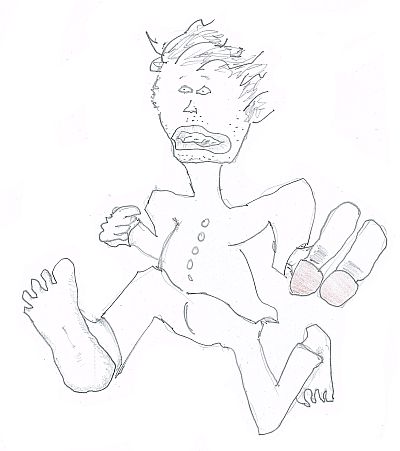 After sprinting for about 15 minutes, from one end of the airport to the other, from one floor to another and back again, drenched in sweat, I am informed that my plane has departed.

I reduce my sprint to a brisk walk, returning my sandals to my feet. Countless times I weave my way through every corner of the airport. “Go back up”, “go back down”, on and on, in circles.

At one point I am instructed to go back to the departure zone, but since it doesn’t make sense to stand in the long line to have my passport checked each time, I am informed of secret routes down back stairwells designed for special cases like mine. Otherwise, I call using the security phones to be picked up and lead through a special way.

For an hour I try to rebook with Turkish Airlines. Initially I had an eight hour layover in Abu Dhabi, but there is now a possibility that I could be flying out this very evening directly to Bangkok. I go from this booth to that, up and down, to the other side, and so on. It turns out I had booked through a smaller airline – Turkish Airlines were only to be the operators of my flight. I finally find the correct booth, only to discover it closed.

Back it was to Turkish Airlines, to this booth and that, asking everyone for help. In the end I will have to wait until morning when the smaller airline’s booth opens. Now for the task of retrieving my luggage.

Another two hours of up/down/other side, over and over again, until I finally retrieve my luggage from the Turkish Airline’s lost and found. At least that is not on its way to Bangkok without me. I am rather surprised, though, that it hadn’t been loaded onto the plane.

I spend a long evening on a hard, cold metal bench hoping that rebooking tomorrow morning will not cost me an arm and a leg. Fortunately, after some research, I found a remote corner of the airport where I could sleep in peace, plug into a very rare electrical socket and get free internet from a neighbouring café. This way I was able to get some work done, so the inconvenience had not cost me any of that. At least it was the first time I could test out my new mobility, running my business and surviving out of a backpack. In time I learned what bare necessities, such as underwear and toothbrush, I should keep in my small backpack, where I kept my computer, passports and all other high necessities. When I had first realized that my flight was for October 2 instead of November 2, I called to the Emirates about a possible rebook, but the extra 80 Euro in charges seemed exorbitant at the time. If I had coughed up that sum back then, my departure from Europe would have been more relaxed, and perhaps my mishap at the departure booth would have been avoided. (click the right pointing hand below to continue…)