It is the last hundred yards of my stay on the north side of Cyprus. It has been a great two winters here: the people are lovely, they take me in as family; I have a great parking spot on the beach; go to the university for free showers; enjoy the lower cost of living; plus other fringe benefits.

But my time here is coming to an end. My intention in making the truck my home was to travel around the world, always moving and discovering new places. Now other factors are coming up which convince me it is time to move on. For one; my perpetual financial difficulties.

After my summer-long return home to Canada for a treeplanting stint, I arrive back on the north side of Cyprus none the wealthier. A friend has offered me a job to help him reconstruct his house in Thassos, one of the many islands of Greece. This offer, together with the two movies about Greece which I had seen just before leaving Cyprus (one of which is Mama Mia), inspire me to move there.

Maybe I have been on Cyprus too long. Maybe I feel I am wearing out my welcome. A generally bad feeling has developed in me, growing stronger as time passes. One particular incident jars me the most.

I am testing out my new 3G modem or the possibility of enjoying highspeed internet right on the beach. The signal is a bit weak at my usual secluded parking spot, so I drive further up the beach and park next to a big hotel. At this time I have an American friend I knew from Czech visiting with me. Jimbo used to set up mobile phone systems in different parts of the world and points out the “hot rod” antennaes poking out of the roof of the hotel. 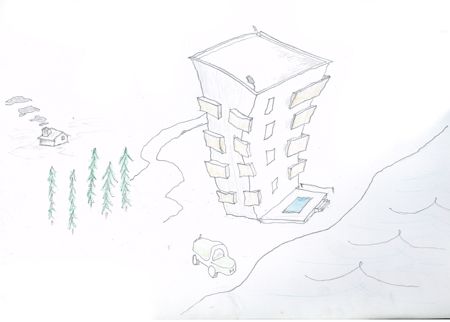 Excited at the prospect, I drive around the hotel while the sun beams its energy on my solar panels as he sits in the back seat, his laptop hooked up to the 3G USB modem dangling outside the window. We inch our way around the hotel while he tests the signal and the data transfer speed. Eventually we decide on a nice spot down the beach from the hotel just a bit, with a clear shot of the antennaes on the roof. We have a good, strong signal. In the interests of a good internet connection, so important for work, I have to give up my nice, secluded, tranquil beach spot I have grown to love these last two winters. Getting out of the truck I am disgusted to realize I’ll have to expend some energy cleaning up the beach garbage from all the passersby before I can properly feel at home.

The first night we’re parked here a car cruises by around midnight. I hear some squawking sounds coming from it, which seems rather odd. Not knowing what it is I continue on with my work. After what happens next, I come to the conclusion that the squawk was made by the moron who objects to this new parking spot for my truck/home.

Because the next evening a fellow comes with two of his buddies, around midnight. Again I am working on my computer with my beloved high-speed internet. This time, instead of driving by and complaining, he parks right behind me, the headlights of his car shining on the back of my vehicle. I have my modem taped to a stick, poking out my back door like an antennae, because it has to be outside for the best signal. With the truck door slightly ajar, those headlights shine in an eerie light. Just like when the police come to question me in the wee hours of the night, which is always a scary experience.

While this drama unfolds, my friend sleeps like a baby in the front seats. Then the typical banging on the walls and shouts of, “Police! Police!”

I open the back doors, my tired eyes half closed, asking what is happening. Three guys are standing there. One of them, who speaks the best English, flashes an ID card in my face. I ask him to flash it a few more times. It reminds me of the fake ID one of my friends likes to carry around with him, which claims he is Elvis Presley. I look this ‘officer’ up and down and point out his clothes.

“Civilian police,” he explains to me. 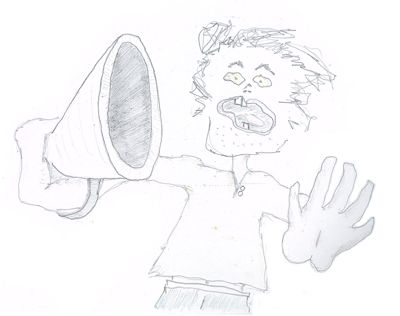 At this point, I guess the squawker has had enough. Already he was making gestures with his eyes that I must be blind not to recognize the obvious identification card.

A flash of metal appears before me. It all happens so fast I’m not even sure what I see. I don’t properly register what is happening, my eyes bulge out a bit in surprise and not a little fear.

The squawker gives me a stern warning that I have five minutes to get the hell out of there.

My racing heartbeat is slowly settling down to a relaxed pace as I repark at my old and peaceful beach spot. As I begin to doze off my eyes suddenly pop wide open.

It was at that point I grasp that the squawker had put a gun right to my forehead!!! It all comes to me in a flash at that moment.

And he pulled out the gun from his holster in a quick and professional manner, like he had served in the army for a few years and actually knew how to use it.

Anyway, to me that incident is just one other sign indicating that it is time to move on!

The logistics for my getting off Cyprus are falling into place. I have purchased my Turkish vehicle insurance, which is valid until around the 20th of December, and have two prepaid months of 3G internet up to the 23rd. The Turkish stamp on my passport gives me around 90 days’ stay on the north side. Everything important is set and in place for me to the end of the month. The plan is to then drive to the south and figure out how to get to the Greek mainland.

Except I now have a problem to deal with at each crossing.

You see, when I drove to the island’s capital — Nicosia on the Greek south and Lefkosia in the Turkish north — to pick up Jimbo, I encountered some objections by the border guards. On driving us back to my beach I was waved over by the police, who carefully examined all my papers. In my two winters on Cyprus, all those times crossing back and forth from north to south, my papers were never examined so thoroughly.

“You came in by the North side? How about customs? You must pay 60 Lira a month and now you owe more than a thousand Lira. You must turn around on the highway, drive back to the port you came in, and work this out with the police.”

By now I’m thinking, ‘screw this!’ as you might expect from me. Instead, Jimbo and I take a little detour, a nice excursion along about a quarter of the island’s northeast coast. We go up to the tip of Karpaz, and within a few days are back on my beach. My plan is to lay low, use small village roads only, and avoid any big highway police. Or to avoid driving altogether.

While Jim has enjoyed his month-long visit to the island, he has become subject to that unavoidable male itch, developing a certain lust for a Czech waitress on the south, Greek side.  He wants to chat her up and possibly score. My presence is welcome, in fact encouraged, because he won’t get bored in between chatting with her as she has to check on her tables. We can play chess to pass the idle time.

Right away I have a bad feeling, but I’m a nice guy and say, “sure”. The bad feeling is because I have that critical 90 day visa stamped on my passport and don’t want to play with fire. Regardless, off we go.

Returning to the north side they give me only two days.

Of course I raise my voice in protest. In the local custom, the border guard woman just waves her arm, shrugs her shoulders and rolls her eyes, beckoning me on my way. This was not her slightest concern.

Two days. What am I supposed to do with two days? After discussing this issue with some knowledged locals, I decide I would go to a discrete and supposedly seldom-used border crossing a short way from my beach to renew my visa in a couple of days. I use the small village roads to avoid the big highway police, but often get lost. I had to turn around often because these old highways are not well marked and can end abruptly before the border. I’ll be driving along, then the highway turns to rubble and is blocked by barbed wire fences. Sometimes guards with machine guns stop me before I even make it that far.

I finally find the discrete little border crossing, make it across, and park overnight. Luckily I manage to catch a Turkcell mobile signal next to the border, so I can keep working in the truck while I am inconvenienced in this horrible way.

After a full 24 hours on the south side, enough to get around the visa requirements, I boldly set out to drive back into the north.

“Because you’ve been crossing the border too frequently.”

“What, am I to be punished just for crossing into the south side to enjoy a beer and a game of chess with a friend?”

The usual Mediterranean shrug is all I get in response and I realize my arguments are not going to take me anywhere.

The border guard woman tells me I have to drive to the capital and ask for an extension on my visa. This reminds me of the last time I suffered this traumatic experience. At that time I was, smartly I thought, explaining that my clients are all over the world, so I am actually contributing to the local economy by bringing money in from other countries. The border guards then had looked at me, with my shorts, ripped sandals and scruffy face, with distrust. One asked, “How do you get paid?” I said I have bank accounts all over the world and just pull out cash from a bank machine. They looked me up and down, then at each other, shook their heads, ‘Not a fat chance bucko.’ No visa extension. It was to be the only time I tried to use that logic.

Regardless, off I go fuming to the centre of the island, masterminding how I am going to accomplish this visa extension. I have only two days to achieve this goal. To add to my worry, I have absolutely no vehicle insurance for the south side. My plan was to use up my remaining two-months’ insurance for the north, as well as my prepaid mobile internet card. All this driving back and forth across the border for vague bureaucratic requirements is a real problem.

However a Not Very Skilled International Criminal