I can’t remember if it was the look on her face, or something she asked, but I explain why I came back into the north using my Canadian passport instead of my Czech. I am basically honest, saying I only had one month left here, that they had given me 90 days, but then reduced it to two just because I went for a beer with my friend into the south. I raise my voice the slightest amount, she does not say anything, and hands me back my passport.

The eight Turkish guards look into my truck and then let me through.

I drive across the 30 metre UN No-Man’s-Land Green Line to the Greek side of the border and hand the guard my Canadian passport. I guess I’m so frazzled by the previous experience that I forget to think, because I should have handed him my Czech passport. My truck is again inspected, the guards ask me why I handed them the wrong passport, and nod, answering for me, “Obviously for the stamp.”

One very important thing I’d like to mention here. This island is apparently in a state of war. I remember one policeman on the south (Greek, EU) side once telling me that I cannot leave the island from the Greek side if I got onto it on the north side. I ask the Greek border guard about this now and he confirms that this is true, but not for an EU citizen. So big trouble as a Canadian, but no problems as a Czech. Phew! It seems that I WILL be able to get to the Greek mainland from the Greek side after all, and not have to go the very long way from the Turkish side. 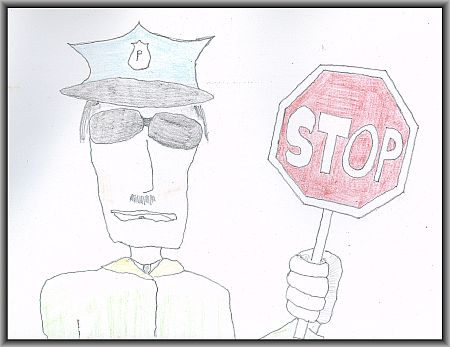 It is imperative that I get to the south side, and then to Greece from there. I have neither the money nor interest to get to Greece the super-long, exceedingly expensive way through the Turkish mainland. Besides, they would certainly make me pay the thousand bucks I owed in monthly customs payments.

I diligently pull over at the Greek booth. My truck is searched in great detail, the border guard speaking with a perfect British accent all the while. He is explaining the significance and importance of the Czech vs. the Canadian passport just as some car whips across the border. He stops, his brow frown, and he whistles at the car as it barrels away. I can’t imagine the driver has heard that whistle as he speeds away southward. The border guard even puffs up his chest, as these male authority types often do. I can almost imagine storm troopers falling out of the sky, sliding down along guide ropes from their hovering helicopters. Of course nothing of the sort happens. Instead, after deflating his chest, he says, in his perfect British accent: “Oh well”. And continues on with his inspection of my truck, stressing the importance of the Czech vs. the Canadian passport.

Officially released, I now cruise out of the border crossing area and truly feel free. I’m driving down the highway, my music blaring full blast as usual, when I look into my rear view mirror and notice a little piggie on my tracks, with its blue light flashing on the roof. Looks like some undercover cop or something. Does he just want to pass? I blink once left, as I always do for cars which look like they want to pass me, slow down a bit, and the undercover cop passes me, his thumb held high. Does this mean he approves that I let him pass so easily? He drives ahead of me then pulls left off to the side of the road. I’m not sure what I should do, so I pull over next to him. Looking down at him from my high and monstrous beast, I ask, “Was that for me, or should I keep going?”

Long story short and skipping over the confusion, I repark to find my truck sandwiched between two undercover police cars. I pull out all my documents, open up all my doors. They search half my truck. I raise my voice. Perhaps, as a reasonably honest tourist, I am getting sick and tired of being presumed as guilty and having to prove my innocence all the time. Arbitrary as those strict requirements may be.

I am nice at the beginning of the interrogation process. That changes. Perhaps it is the four beers I hosed down before I got here, or perhaps my generally increasing impatience with this sort of treatment gets the best of me.

Escape from the North