Tourists from “Green countries” allowed in if fully vaxxed with two shots, but still require a seven day quarantine period on arrival, so still not quite there yet folks!

Effective February 1, 2021, foreign nationals allowed to enter [refer below for latest info on who may enter] under relevant IATF resolutions shall be subject to the following conditions:

On January 25, 2021, with a little over 10,000 deaths from Covid reported in Philippines so far, out of a total country population of more than 110 million, it seems rather baffling that this tropical country with temperatures around 31C all year round would undergo such extreme lockdown measures. Even between individual islands out of the more than 7,000 total. As it stands now a foreigner cannot enter the country if not married to a local, but things are due to change at the end of this month, so lets see how that goes. In the meantime I will update this page as I find out more information, with more details below. Latest rumour is the country might open at the beginning of June, but could be pure speculation.

When we arrived to Manila a little over a month ago we had to pay 4,500p each for a swab test but only had to pay for one night in a designated hotel to wait for the results. Then we flew to our destination in Iloilo City, where we were permitted to stay under home quarantine for ten days. No official had check our adherence during this period and our home quarantine consisted of a makeshift wall made of piled up furniture, reaching about halfway to the ceiling, which the parents had put into place to divide the living room in half in order to create our own entrance to our own room. During this period we rarely ventured outside the garden and where no one bothered to wear a mask. Fortunately there was a kiosk nearby selling beers, although none of the restaurants were permitted to do so. Once this ten day period was over we went to some local official place to receive our quarantine clearance, an A5 size paper without which we later found we could not get onto a neighbouring island — thankfully we saved it and wife took a picture of it.

In other provinces the rules can be markedly different and it has been amusing reading the updates and frustrated responses to them in the FB Cebu Foreigner’s Club. At this date a swab test is required to go to different parts of the country. The latest news is that a swab test is required on arrival to Manila, with a second one for confirmation three days later before being set free.

In Iloilo City every mall requires a face shield in addition to a mask, but regular glasses are okay instead of the face shield. In Cebu you are required to wear a face shield if riding as a passenger on a motorcycle, but not the driver. Passengers in jeepneys require face shields, not all the jeepneys display this requirement, but for even those that do, no one bothers to adhere. Babies are not allowed in malls. Then again, the rules in this country can often be quite confounding, but the people are loveable and their laissez-faire attitude to a lot of things is what makes this country a place to escape from your worries to hit its endless beaches and crystal clear waters.

Some websites where you might find some useful information:

Below is the latest info I have drawn on the situation on January 25, 2021

People who are allowed to enter the Philippines as of now if coming from any of the banned countries:

b. Personnel of accredited International Organizations such as WHO and the U.N.

a. They must secure an entry visa to be allowed entry.

b. They must be traveling with the Filipino Citizen.

P.S – Balikbayan Program is still suspended for people coming from any of the banned countries. Subject to change if the travel ban will be lifted on January 31 or it will be extended again.

Reminder: The travel ban is still in effect until January 31 unless extended. The only thing that was lifted is the absolute 14 day facility based quarantine. 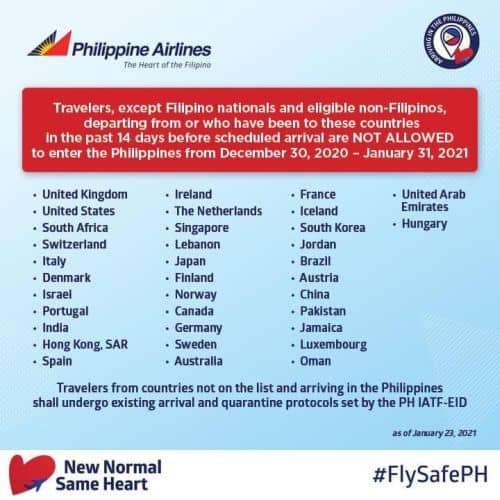 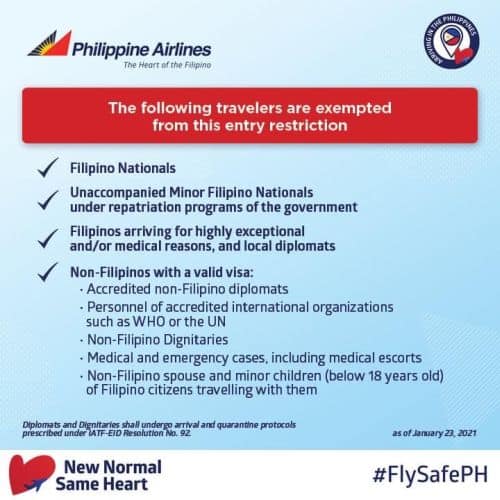 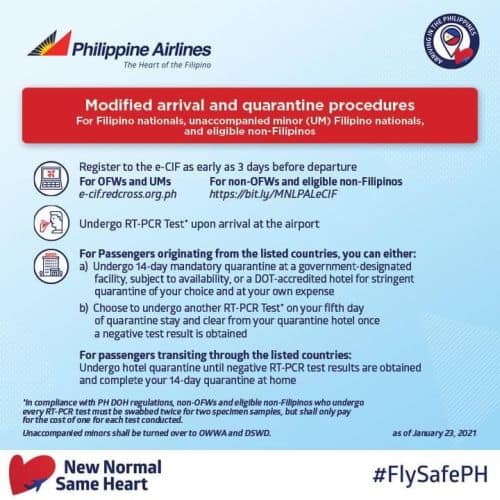